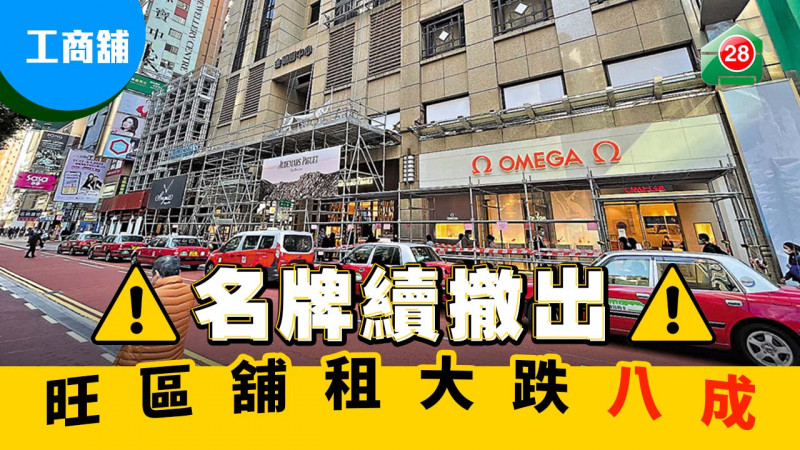 The new crown pneumonia epidemic has lasted for nearly two years. The luxury retail market in Hong Kong has been hit hard under the customs. International famous brands have successively abandoned their flagship stores in core areas, and the rents of some first-tier prosperous areas have plummeted by 70% to 80%. Earlier news reported that Burberry, a famous British brand leather goods store, rented a 10-year-old duplex store at No. 38 Russell Street, Causeway Bay, on the 3rd floor of the Golden Chaoyang Center. The contract will expire early next year, and the brand has decided not to renew the lease.

The duplex shops are located on the G/F to the 2nd floor from Shops A and B to the 2nd floor of Jin Chaoyang Centre, Russell Street, Causeway Bay, with a total area of 5,200 square feet. Looking at the information, 10 years ago, benefited from the peak consumption period of mainland tourists visiting Hong Kong, when Burberry rented shops for about 7.7 million yuan a month, 2.5 times higher than the previous tenants. Later, the brand was renewed to 8.8 million yuan in 2015, and then the rent fell. It is estimated that the current monthly lease is 2 million yuan. In other words, the rental value has fallen by 77% in 6 years.

According to another source, Burberry also deployed a huge duplex on Canton Road in Tsim Sha Tsui to abandon the lease, and the lease also expires early next year. The shop is located at No. 104 to 106 on the 1st floor and No. 207 to 209 on the 1st floor of G4 and G5 of Xingang Centre. It is on one side of the junction of Canton Road and Haiphong Road. It has a total construction area of approximately 10,140 square feet. It has been leased from 2011 to 2014. At one time, the monthly rent was as high as 6.5 million yuan, and the rent per square foot was 641 yuan, but the current monthly rent has been reduced by more than 30% from the high to about 4.5 million yuan, and the rent is 444 yuan per square foot.

At its peak, the brand paid a total of 15.1 million yuan in rent for the two giant shops mentioned above. If the two shops are closed, there will be only 11 shopping mall branches in Hong Kong.

In fact, the wave of rent-abandonment of brand-name stores started as early as last year. According to the information, the Swiss watch brand OMEGA used a monthly rent of 5 million yuan in 2011 to rent the first floor of the first floor of the ground floor of Jinchaoyang Center, which was originally leased by Sa Sa Cosmetics, and later rented the adjacent building with a monthly rent of 3 million yuan. Shop E on the ground floor and large advertising spaces have been opened up into a flagship store of 8,600 square feet.

It is reported that the lease of the above-mentioned shops expired in 2015, and Omega renewed the lease for 4 years. The monthly rent for the two shops with advertising space was as high as 9.6 million yuan, and the rent per square foot was 1,116 yuan. In the end, although the rents of shops have been lowered, the brand still lost to the new crown epidemic. They had to withdraw from Russell Street and abandon the huge shop that had been rented for 9 years. It is estimated that more than 60 million yuan of rental expenses will be saved each year.

At the same time, individual landlords on the same street rented shops at low prices to avoid leaving their properties vacant until the New Year. According to market news, the original tenant Colourmix moved out of the ground floor of No. 18 Russell Street, Causeway Bay, and has obtained a short rent of 100,000 yuan for a mask shop for five months. The rent plummeted by 86%. The shop has a construction area of about 1,000 square feet and faces Times Square. The converted price per square foot is only about 100 yuan, which is only 9% of the rent per square foot of the above-mentioned Omega branch during the peak period. According to the news, the lease term will end in March next year, which spans the Christmas and New Year period.