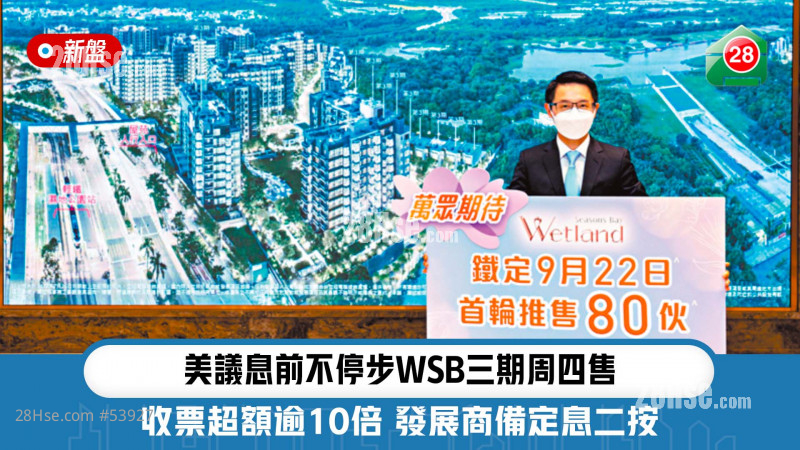 The U.S. does not stop before the interest rate negotiation, the third phase of WSB on Thursday sold more than 10 times more than the developer's fixed interest rate
Wenwei  2022-09-20  New Properties

As the U.S. Federal Reserve will announce the results of its interest rate meeting in the early hours of Thursday, the pace of new sales will vary. The third phase of Wetland Seasons Bay in Tin Shui Wai, which is an existing building under SHKP, will be sold in the first round of 80 units this Thursday afternoon, while ONE INNOVALE-Bellevue, Fanling North, a subsidiary of Henderson Land, has decided to move forward. Last night, the original price was increased first. 50 units, sales arrangements will be announced shortly.

Faced with the current upward trend of interest rates, the third phase of Wetland Seasons Bay has been confirmed to sell 80 units in the first round after the announcement of the U.S. interest rate negotiation results this Thursday. SHKP Acting General Manager Hu Zhiyuan believes that buying a property is a long-term investment and a short-term interest rate. The fluctuation is not expected to have a great impact on the desire to enter the market. It is believed that buyers who have actual housing needs have already calculated the factor of interest rate hikes. This project also has a two-year payment plan with fixed interest rates for the first two years for buyers to choose. He also pointed out that the deployment of the second round of sales will be decided depending on the response of the first round of sales.

The price per square foot is 14,300 for the big hand group

Hu Zhiyuan said that the 80 units sold this time, including one-bedroom with storage room, two-bedroom, two-bedroom with storage room, three-bedroom and three-bedroom with storage room, have a discounted net price of 4.968 million to 8.845 million yuan. The average price per square foot was RMB 14,344. In terms of pricing, the 80 units have a market value of nearly 600 million yuan. Tickets will close at noon tomorrow, and this Thursday will be divided into groups A and B. There are 17 units available for sale in group A, buyers can buy up to 4 units, and group B buyers can buy up to 2 units. He pointed out that the auction has received more than 900 votes so far, and with the 80 people in the first round of sales, the over-registration is more than 10 times.

On the other side, Lin Damin, general manager of Henderson Property Agency Sales (1) Department, said that ONE INNOVALE-Bellevue in Fanling North added 50 units to the original price last night, with an average price of 14,783 yuan per square foot, with an area of 228 to 446 square feet, covering open-plan For two-bedroom households, including 3 units with rooftop features, the net price is 4,101,300 to 6,932,200 yuan after deducting a maximum of 7% discount.

He pointed out that there were 193 units in the first three price lists, with an average price per square foot of RMB 14,565. As of 6:30 last night, about 1,800 votes had been received for this project, which was 8.3 times over-registered. The sales arrangement will be announced in the short term.

In response to market concerns about raising interest rates, HSBC Hong Kong Retail Banking and Wealth Management Business Mortgage Business Director Xu Kailian said that the bank launched the first-year 2.75 fixed-rate mortgage plan for the buyers of this project. If the buyers of this project choose the green mortgage plan, they can get an additional 6,888 Yuan cash prize, and can participate in the lottery.

In addition, Fong Fei, No. 5, Victory Road, Ho Man Tin, a subsidiary of Hip Shing Hong, sold 2 units in a single day yesterday, namely 6B and 7B, both with an area of 286 sq. ft.Yuan, the buyer is a local customer.