Under the haze of interest rate hikes, the owners are worried about the future market trend, and many districts continue to see second-hand price cuts, and even record many transactions at low market prices and loss. A front-line agent revealed to Hong Kong Wen Wei Po that even the owners of blue-chip housing estates such as City One Shatin and Taikoo Shing are worried that the property market is "not too low" and would rather take the initiative to reduce the price by 5% to 10%, and even some owners reduce the price. Nearly 20% hope to cash out as soon as possible. In view of the owner's initiative to lower the asking price, buyers have also dispatched "bamboo bids". The agent pointed out that the number of property inspections during the three-day holiday (10 to 12 days) has slightly rebounded compared with the previous week, and at the same time, the transaction volume has rebounded, causing the second-hand market to appear " Price falls and volume rises”. ◆Hong Kong Wen Wei Po reporter Zeng Yejun

Huang Jinhan, assistant sales director of Midland Properties, said that Shatin City One has temporarily recorded 18 transactions so far this month, with an average price per square foot of 14,795 yuan. Among them, 4 transactions were less than 4.25 million yuan, including 8 low-rise H rooms that changed hands for 4 million yuan recently. In fact, the owner is worried that the Hong Kong bank will raise interest rates next week. Last week, buyers were still required to bring a ticket to reduce the price. However, they have taken the initiative to inquire about the market situation and have taken the initiative to reduce the price by 5% or more. Buyers saw the market turnaround, and took advantage of the situation to make a bold counter-offer of more than 10%, and some customers even counter-offered with a "3 prefix". It is expected that the transaction price this month will hover between 4.5 million and 4.8 million yuan.

City One Shatin sells at 5% off market price

Hu Guangyi, the sales manager of Midland Property, revealed that he recently recorded the transaction of the middle and low-rise G room in Tower 9, Shatin City One, with a usable area of 327 sq. The price is 14,526 yuan. The original owner held the above site for 5 years to invest and collect rent. The book profit of this change was 10,000 yuan, and the actual loss after deducting stamp duty and miscellaneous fees was about 250,000 yuan.

Fan Haoxuan, sales manager of Midland Property, pointed out that Taikoo Shing in Quarry Bay recorded 6 transactions this month, with an average price per square foot of RMB 17,800. Buyers saw low-priced transactions in many districts, hoping to close the goods at the "surprise price", and some investors even counter-offered more than 20%. Because owners are worried about raising interest rates, and the market has recorded many low-price transactions, they are worried that the property market is "not low", so many owners are willing to take the initiative to reduce the price by 5% to 10%.

Qian Minyi, senior sales manager of Midland Property, said that Room G on the middle floor of Ming Palace Court in Taikoo Shing has a practical use of 582 square feet. However, the mid-level unit in Room G in the same block was sold at HKD 10.8 million in August 2017, which shows that the transaction price of this time has been “turned back in time” to 2017.

Xie Jianye, chief assistant and co-director of Midland Property, also pointed out that as the interest rate hike time is getting closer, the second-hand price reduction has intensified. The middle and high-rise Room C in the right wing of Block 3, Lingdu, Phase 2, LOHAS Park, Tseung Kwan O, has a usable area of 725 square feet, and the original owner has put up 3 units. In June, seeing the market conditions take a sharp turn for the worse, worrying that further US interest rate hikes will make the property market worse,The price has been reduced to 8.18 million yuan, a cumulative decrease of 1.72 million yuan or more than 17%, and the price per square foot is 11,283 yuan, which is the lowest transaction price of similar units in the housing estate since January 2019.

The second-tier market also recorded low-price transactions. Zeng Huijing, the branch manager of Centaline Real Estate, revealed that Room 4 on the lower floor of Block E, Tiansheng Court, Tianshui Wai, with a usable area of 650 square feet, was sold at a price of 900,000 yuan or 17%, and the unpaid land price was sold at 4.4 million yuan , the price per square foot is 6,769 yuan, the cost of the same type of unit has hit a new low in the past six months. 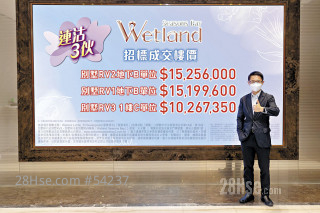