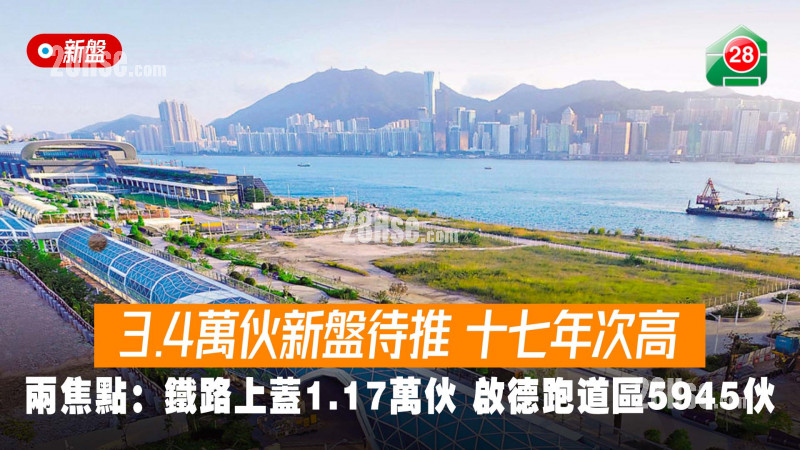 In the past few years, although the epidemic situation in Hong Kong has fluctuated from time to time, it has generally been under control. The economic recovery is in good shape. Developers are actively starting construction and applying for pre-sale. Looking forward to 2022, statistics show that there will be about 105 potential new first-hand private residential projects in Hong Kong this year. Supply, a total of about 34,046 units were provided, in addition to exceeding 30,000 units for ten consecutive years, it was the second highest level in the past 17 years since 2006. Among them, the railway station superstructure project is the biggest focus this year, with 11 projects providing a total of 11,669 units, accounting for 34.3% of the total number of units in Hong Kong; and the Kai Tak runway area will also have 10 projects providing 5,945 units, which is also the focus of this year. potential supply. ◆Hong Kong Wen Wei Po reporter Li Zitian

According to the statistics of Rica Court, the above-mentioned about 34,000 potential supply units refer to the total number of units that are more mature and have the opportunity to be available in the market this year, but the actual number for sale will depend on the market conditions and the deployment of developers and will be announced later Depending on the number of spin-off phases, the initial estimate is closer to the actual launch volume of about 20,000 units, which is a 19-year high since the actual supply of 22,265 units in 2003.

More than 15,000 units are available for sale in Kowloon, accounting for 44%

Divided by region, there are rare land in Kowloon and Dingdangmatou in the New Territories. In 2022, there will be 42 potential private residential projects available for sale, with a total of 15,121 units, accounting for 44% of the total supply in Hong Kong. In terms of projects, it ranks first among the three districts, with the number of projects accounting for 44% of the total supply in Hong Kong. This year, the overall project in Hong Kong has reached 40%, mainly benefiting from the Kai Tak Runway Area. As many as 10 projects (including subdivided projects) have the opportunity to enter the market. A total of 5,945 units have been provided, and one runway has accounted for 39% of the total in Kowloon. potential supply.

In the New Territories, there are 30 potential supply projects in 2022, involving a total of 15,128 units, of which the focus is on Yuen Long and Sai Kung districts, with a total of 10,739 units in the two districts, accounting for more than 31.5% of the total in Hong Kong.

As for Hong Kong Island, there are 33 potential projects waiting to be launched in 2022. The project volume is the second largest among the three major districts in Hong Kong, but the total number of units involved is only 3,797, of which nearly 90% of the projects are 200 units. The following small new disks. As for the 2,670 units that made the biggest contribution this year from the Southern District, the focus is on Wong Chuk Hang Station covering the South Shore of Hong Kong Island with 1,200 units and 800 units respectively in Phase 4 and Phase 4, accounting for half (52.7%) of the total supply on Hong Kong Island.

In terms of the "One Railway, One Bureau" project, MTR will have 6 railway stations along the line covering 11 projects in 2022, providing a total of 11,669 units, including the 11th and 12th phases of LOHAS Park with a total of 3,236 units; Kam Sheung Road 2,200 units in Phase 1A and the remaining phases of the station; 2,000 units in Phases 3 and 4 of the South Shore of Hong Kong Island at Wong Chuk Hang Station; 1,929 units in Tin Wing Station; 1,365 units in Phase 1A of Ho Man Tin Station Phase 1 and Phase 2, etc. Urban renewal pace continues, URA20In 2022, a total of 4 mature projects have the opportunity to enter the market, involving a total of 876 units, of which the larger ones are the 337 units provided by Cheung Sha Wan Yingzhu and the 262 units at 280 Tung Chau Street, Sham Shui Po.

In addition, statistics also show that there were nearly 17,500 first-hand private property sales and purchase registrations in the primary market last year, an increase of 17% year-on-year. next level. Chen Haichao, director of the research department of Ricago Real Estate, pointed out that although the epidemic situation has fluctuated and repeated last year, it is generally under control, and the market purchasing power has emerged, reflecting the strong demand for local housing. Entering 2022, although the epidemic has heated up again recently, as long as there is no large-scale outbreak in the local area, it is believed that developers will take advantage of the victory and continue to actively launch new projects to respond to the market during the year.

In addition, everyone is still waiting for the news of customs clearance in 2022. As long as the measures are implemented, it is expected to attract mainland funds who like to invest in new projects to enter the market, which will help to increase the trading of first-hand new projects in 2022. In addition, there will be many large-scale new projects and railway superstructure projects to be launched this year. Therefore, Chen’s preliminary expectation is that in 2022, the number of registrations for first-hand private property sales will increase by nearly 10% compared with last year, reaching a level of about 19,000, and the registered amount will also increase. It is expected to increase by 5.5% accordingly, challenging the record high of 250 billion yuan.