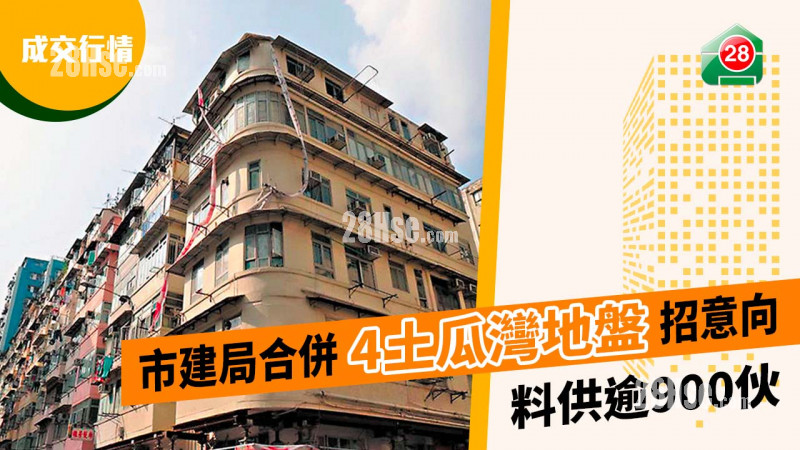 Hong Kong Wen Wei Po (Reporter Yan Lun Le) The URA’s To Kwa Wan old building redevelopment plan has entered the harvest period. Yesterday it announced the merger of 4 adjacent sites in To Kwa Wan. The project will be invited today and will be closed on the 7th of next month. . After the merger of the 4 sites, the buildable floor space is as high as 526,800 square feet, which is the second largest of the redevelopment projects launched by the URA in To Kwa Wan. It is estimated that about 468,300 square feet will be used as residential buildings, based on the average per unit. The unit area is about 500 square feet, and it is expected to provide more than 900 units.

The total floor area of the project exceeds 520,000 square feet

It is understood that the 4 projects are located adjacent to each other, distributed in the area of Rongguang Street and Qiming Street. They are located on the north side of Huanhai·East Coast, and it is only a few minutes walk to To Kwawan Station. According to information from the URA, the total site area of the project is 58,535 square feet. It is possible to develop a commercial and residential project with a plot ratio of 9 times, and the upper limit of the total floor area is about 526,812 square feet. It is estimated that 8 times the plot ratio will be used for residential development, involving 468,300 square feet, which can provide more than 900 units, while the non-residential floor area accounts for about 1 times the plot ratio, which is expected to involve 58,535 square feet.

According to the URA, developers and consortia that have successfully obtained projects must follow the "overall design requirements" for the development of the To Kwa Wan community in Kowloon City as the blueprint for the construction of new development projects, and rebuild them with the adjacent URA. The project generates synergies to achieve a more complete and integrated reorganization and planning of the entire community, promote the connectivity and walking environment of the community, and use more distinctive "place creation" and smart elements to enhance the suitability of the area. Habitat.

The URA adopts a "community development" model to carry out a total of eight connected development projects in the To Kwa Wan community in Kowloon City, including this development project. The eight projects will be awarded cooperative development contracts to developers at different times, but each project will continue to exert synergies through the standards set by the "overall design requirements".

According to data, the first redevelopment project in the community was the Bailey Street/Rongguang Street project that Henderson won the bid for 8.189 billion yuan in September this year. With a buildable floor area of 717,500 square feet, the land price per square foot was 11,414 yuan. , It is expected to provide 1,150 units, which is the largest commercial and residential project of the URA in the past 7 years. The Hung Fook Street/Yin Han Street project, which is currently under tender, has a buildable floor area of approximately 444,000 square feet and provides approximately 750 units. From June until now, together with the proposed projects this time, a total of 1,688,100 square feet can be built on the three sites.