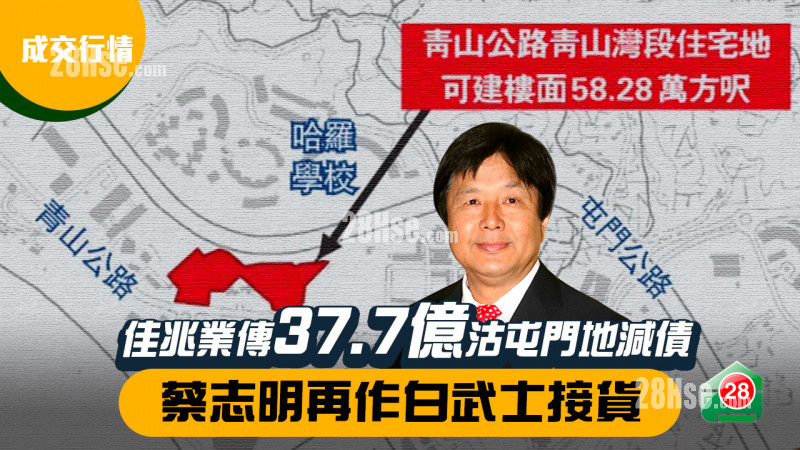 It is rumored that Kaisa (1638), which is in suspension, has not paid the bond interest payable last week, which means that it is close to default. Facing financial pressure, foreign news agencies quoted news yesterday that Kaisa intends to sell residential land at the Castle Peak Bay section of Castle Peak Road in Tuen Mun 48, with a buildable floor area of 582,800 square feet, involving 3.77 billion yuan, and a floor price of 6,468 yuan per square foot. According to sources, the buyer is Cai Zhiming, the chairman of the Rising Sun International Group, known as the "Toy King", and he once again became a "white warrior" to relieve Kaisa's temporary difficulties. Hong Kong Wen Wei Po reporter Yan Lunle and Li Zitian

Kaisa won the Hong Kong official land bid for the first time at the beginning of last year and won the bid for residential land at the Castle Peak Bay Section of Castle Peak Road in Area 48 of Tuen Mun with a total of 582,887 square feet. The land price per square foot is 6,005 yuan. However, in the face of financial pressure, Kaisa is reported to have taken a series of actions in the same way as China Evergrande (3333), including the sale of the aforementioned land.

Kaisa has not yet replied to the news

Foreign news sources quoted that Kaisa sold the Tuen Mun residential official land to "Toy King" Cai Zhiming for 3.77 billion yuan, at a land price of 6,468 yuan per square foot. It is expected that after deducting arrears, the group will receive a net cash inflow of about 1.12 billion yuan. As a buyer, Cai Zhiming and his son are seeking a mortgage of 4.015 billion yuan to complete the acquisition.

Hong Kong Wen Wei Po made an inquiry to Kaisa yesterday, but no reply was received before the deadline. It is understood that Kaisa is reviewing its available-for-sale assets to resolve the liquidity crisis. The residential site at Castle Peak Bay in Tuen Mun, which is in this transaction, is close to the Gold Coast, Man Mingshan and Harrow International School. The land plot has been approved by the Buildings Department in January this year, allowing the construction of four 3-storey houses and four 21-storey residential buildings.

According to the information, Kaisa has two land developments in Hong Kong. In addition to the Tuen Mun site mentioned above, the other is a Kai Tak land (50% interest) worth about 7 billion yuan. It has also been reported that Kaisa is looking for a buyer for this land. .

As for Cai Zhiming, who took the shot this time, it is understood that he is friendly with Kaisa Chairman Guo Yingcheng. The two are the "Chaozhou Gang". Cai Zhiming participated in the investment as early as when Kaisa went public. When Kaisa was in debt crisis, Cai Zhiming came forward to take over the Shenzhen Shipping Group held by Kaisa. After Kaisa completed its debt restructuring, he once again privately invested 4% of Kaisa to help it reach the red line of 25% of the public shareholders.

As for Sing Tao News Group’s June sale to Kaisa’s son Guo Xiaoting, Sing Tao’s board of directors also saw members of the Cai family, among which Cai Jiazan, the only son of Cai Zhiming, was appointed as an independent non-executive director.

On the other side, the new disc melee has become fierce, and the developers have their own surprises to attract customers. Kennedy Town, a new development project jointly developed by SHKP, Wheelock and Henderson, KENNEDY 38 yesterdayIt was announced on the same day that SHKP Club members who visit the demonstration unit can participate in the lucky draw and have a chance to win an iPad mini tablet with 4 places. Xie Wenjuan, the managing director of SHKP Club, said that SHKP Club members can enjoy a 1% discount on the sale price if they sign the temporary sale and purchase agreement within the period specified in the specified price list.

SHKP Acting Deputy General Manager Tang Jinjiang said that since the announcement of the first price list, the project has so far received nearly 1,100 votes. Among them, more than 20% of customers want to buy 2 or more units. He added that the project will be closed at 4 pm this Friday, and there will be a chance to launch additional units in the first round of after-sales. It is expected that there is room for a 3% to 5% price increase.