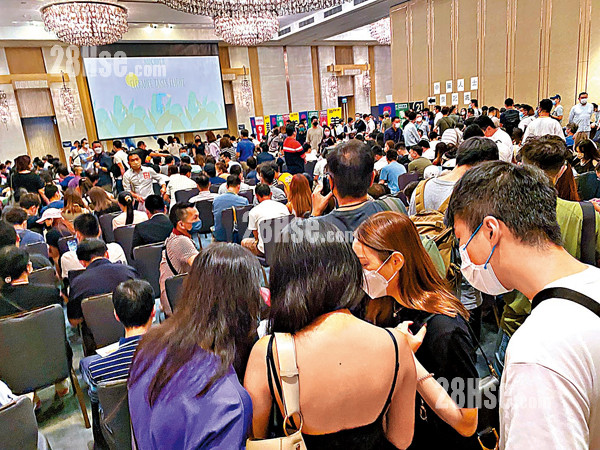 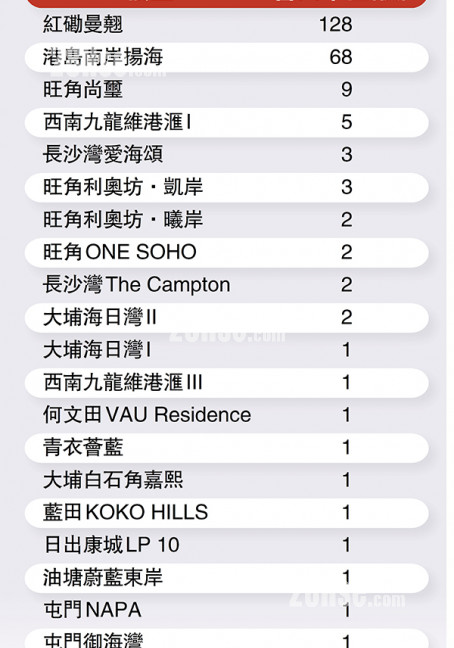 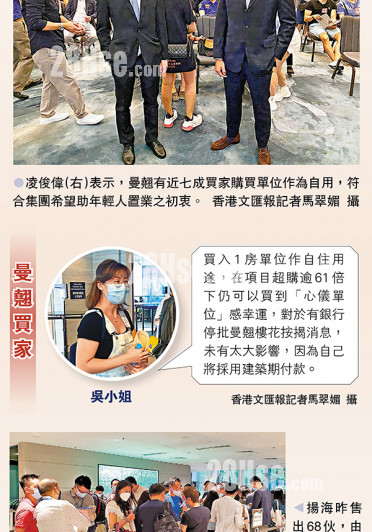 Residential demand in Hong Kong is in short supply and property prices continue to rise. More than a hundred square feet of nano disks have become targets for young people to buy in cars. Guihong Group's Hung Hom Manqiao sold 130 units with the lowest admission fee of 3.39 million yuan for a new property in the urban area in the past three years, attracting more than 8,100 registrations; even if the bank stopped approving the off-the-plan mortgage, buyers can only choose to pay for the construction period , There is no hindrance in sales, the scene is very market, as of 3 pm yesterday, 128 units have been sold in just 5 and a half hours, accounting for more than 98% of the total units. Also sold. On the other side, Kerry Hussin and MTR cooperated with Wong Chuk Hang Station on the south coast of Hong Kong Island. Yanghai opened the third round of 135 units for sale yesterday, and 68 units were sold throughout the day. Together with other new projects, 234 units were sold in one hand.

Kwai Hung Group, Ma Tau Wai Road, Hung Hom, sold 130 units yesterday, with an area ranging from 186 to 334 square feet, including open-plan, one-bedroom and characteristic households. After deducting a 16% discount on construction period payment, the discounted price was 3.399 million to 9.303 million The discounted price per square foot ranges from 17,702 yuan to 28,699 yuan. The sale was opened at the Kerry Hotel in Hung Hom yesterday morning. Since the project received more than 8,100 tickets, the developer's exhibition had already drawn lots the day before to arrange the order of the building to be carried out in stages. The buyer was approved to start at 9:30 in the morning. They showed up one after another, and there were many queues at the scene, most of them were young customers. It was seen on the scene that there were huge crowds both inside and outside the venue, and there were also endless queues of people queuing up to register. It was like being in a flower market. The situation is rare in recent years. There is no major group in this sale, and each buyer can buy up to two groups.

Ling Junwei, director of Guihong Group, said that the market response of Man Qiao’s first round of sales was very enthusiastic. Among them, nearly 70% of buyers bought units for their own use, which is in line with the group’s original intention to help young people buy their homes. The rest are investors, who are optimistic about the many new developments driven by the new railway that will be completed soon in the area, and intend to use them for long-term rent collection.

Chen Yongjie, vice chairman and president of the housing department of Centaline Property Asia-Pacific, said that Manqiao is mainly above car passengers, and that Manqiao has a small silver code to attract home housing customers. Therefore, there are a large number of customers on the site, and there are more than a thousand people on the spot. It is rare in recent years, reflecting that the project has not been affected by uncompleted mortgages, and customers also pay more on the construction period. Bu Shaoming, Chief Executive Officer of Midland Realty's Residential Department, pointed out that in the market in Manqiao, the proportion of young customers born in the 80s and 90s is as high as 80%, and investors account for about half. The rental yield is more than 3%.

On the other side, Wong Chuk Hang Station on the south coast of Hong Kong Island, which received 2,126 votes and was jointly developed by Kerry Construction Partners and MTR, Yang Hai conducted the third round of sales yesterday. A total of 135 units were sold, covering 1 unit with one bedroom and 78 units with two bedrooms. ,39 units with three rooms and 15 units with four rooms, and another 2 tart orders are relaunched, with an area ranging from 320 to 1,420 square feet, with the highest discount rate of 20%. 36,590 yuan. This time, the building is divided into three groups, including the S group, which is sold as a pair of adjacent three-bedroom and four-bedrooms. There are 14 pairs of combinations; buy at least one three-bedroom unit or four-bedroom unit, or buy 2 to 4 units. Group A; and Group B with 1 to 2 units.

Chen Yongjie pointed out that the bank recorded four groups of customers buying two groups during the S group building picking time, each group spent about 70 million to 80 million yuan. He said that due to the recent stock market fluctuations, many investors have turned to simpler property investments, and arbitrage has increased. The long-term investors who attended yesterday accounted for 60% to 70%. According to news, Yang Hai sold 68 units yesterday. Tang Yaozong, general manager of Kerry Development Hong Kong, said that Yanghai sold 450 units in just half a month since the first round of sales, with a total sales of more than 10 billion yuan.

In addition, the first round of 128 units of THE HOLBORN at 1 Shau Kei Wan Road, Quarry Bay, under Henderson Land Development, was cut off yesterday. According to the news, more than 1,300 votes were collected and the over-registration exceeded 9 times. The units went on sale today. Lin Damin, general manager of the business (1) department of Henderson Property Agency, said that the Kai Tak THE HENLEY III has accumulated 1,247 votes (with intermediaries accounting for 24 votes). With the opening of the second round of 81 sales tomorrow, the over-registration is about 14.4 times.

The fourth round of 82 units in the fourth round of the joint development of Southwest Kowloon Harbour View III by Wheelock and Huoxin Land will be launched this Wednesday, of which 6 units will be tendered for sale; this batch of units includes 39 units newly launched and 43 units of second-hand goods.

With the launch of a number of new homes on the market, the market sentiment continues to heat up. Bu Shaoming estimates that the first-hand volume in September is expected to exceed 1,800 units, a significant rebound of 45% on a monthly basis; Chen Yongjie expects that the number of first-hand transactions in the entire month will be sufficient. Up to 2,000 cases.