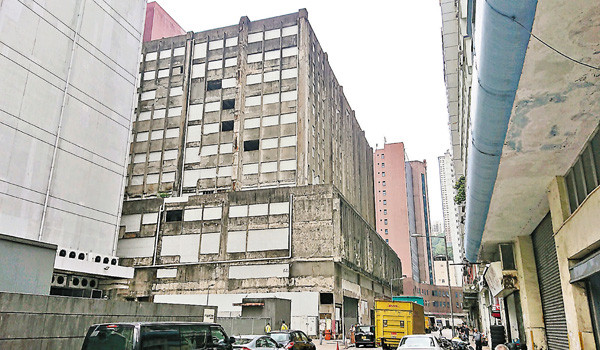 When the government's land supply was insufficient, developers took advantage of the momentum to "relax" their properties to develop residential buildings. Among them, Xindi has been very active in recent years to promote the use of different types of properties, including agricultural land and industrial buildings. Among them, after the proposal of the Tsuen Wan On Tai Industrial Centre was rejected last year, although it is still scheduled for review and review, the developer has just submitted a new proposal to implement "two-handed preparation". The site plans to build a 31-storey residential building that will provide 465 units, an increase of 42% from the 327 units approved in 2015. Hong Kong Wen Wei Po reporter Yan Lunle

The Tsuen Wan On Tai Industrial Centre held by SHKP is adjacent to the new home ownership Wong Sheung Chui Court. The project and the three adjacent industrial buildings owned by different owners belong to the "Comprehensive Development Area (3)". Therefore, SHKP has used the project every time in the past. When applying for development, the Town Planning Board will submit the application together with the 4 industrial buildings. However, it is reported that the other three buildings have not reached a consensus, so the only site that SHKP can develop and control should be the Antai Industrial Center it owns.

Too many times to propose new amendments

Looking at the information, the project was conditionally approved for housing construction as early as 2015. At that time, it was planned to build 6 houses at a rate of 5 times the residential plot ratio, providing approximately 1,047 units, of which the Antai Industrial Center owned by SHKP accounted for approximately 327 units. Later, at the end of 2019, SHKP submitted another proposal of 1,200 units. The number of units in Antai Industrial Center was increased to 480 units. However, after a year of back and forth documents, the application was finally withdrawn.

However, Xindi did not stop. In August last year, it submitted an amendment to the approved plan in 2015. The total number of units was slightly reduced to 1,110 units. The main changes also only involved the Antai Industrial Center, including increasing the number of units to 390 units. However, the amendment was rejected, and the SHKP party proposed a review, which is scheduled for review in August this year. However, during the review period, SHKP put forward a new plan to the Town Planning Board. The old plan for alterations was almost withdrawn in 2019, and the residential plot ratio of the four industrial buildings was increased to 6 times.

The new plan shows that there will be five 31-storey buildings on the entire site, and another one-storey basement parking lot, three-storey clubhouse, three-storey social welfare facilities, etc. The height will be increased from 100 meters above the main level benchmark of the approved plan in 2015. To 120 meters. As a result, the total number of units increased by 283 units to 1,330 units, an increase of 27% over the approved plan. It is worth noting that the new proposal just submitted by SHKP will be reviewed on August 13 and the review will be conducted on August 20. In other words, if the new proposal submitted is passed, the review will become meaningless. .

The unit type is changed to one or two bedrooms.

According to data, the 4 industrial buildings have a total site area of approximately 121,800 square feet. Based on 6 times the plot ratio, nearly 678,900 square feet of floor space can be built and residential, which is 114,300 square feet more than the 564,600 square feet of the old plan in 2015. Feet or 20%. SHKP proposes to develop the project in 4 phases. It holds Site A of Tsuen Wan On Tai Industrial Centre and will firstFor development, the plot ratio has been slightly increased to 6.32 times to accommodate a 100-place child care center for planning enhancement to meet the needs of social welfare services in the district, and it has been accepted by the Social Welfare Department.

According to the document, Antai Industrial Center plans to build a 31-storey residential building with a total floor area of 201,000 square feet, an increase of 20% compared to the old plan. It is expected to provide 465 units, an increase of 42% compared to the 327 units in the old plan, and the average unit area is reduced. 16% to 432 square feet. According to the preliminary plan submitted by the developer, the new plan will be based on 1-bedroom and 2-bedroom units, without open-plan units. The old plan will be based on 1-bedroom and open-plan units. The apartment layout has changed, which is believed to cater to In recent years, after the relaxation of first home mortgages, mid-priced properties have become more popular in the market.

In addition, the building design layout of Site A will also be changed to better solve the environmental noise problem that has increased in recent years. Buildings will also be moved back and private living spaces will be improved. For the remaining sites B to D held by different owners, the building design and layout remain unchanged. The applicant clearly stated in the document that he has been working hard to advance the project and has a definite development intention for the reconstruction project.

In addition to Xindi, other developers are also actively increasing land reserves. Among them, Kerry acquired 50% of the equity of the two project companies that hold the land of Shap Heung Road and Tai Tong Road in Yuen Long, New Territories from Topspot International for a price of about 315 million yuan. The above two plots belong to agricultural land reserves and are currently applying for development into private residential properties. It is understood that after the completion of the relevant procedures, it is estimated that the total construction area of the Shibaxiang Road plot will be approximately 245,000 square feet; and the total construction area of the Datang Road plot will be approximately 36,400 square feet.