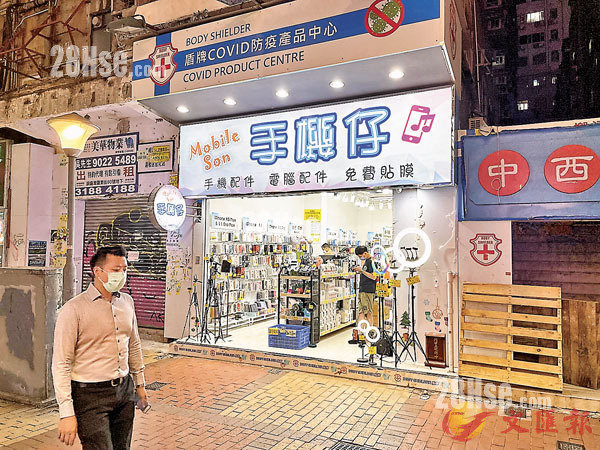 The epidemic has hit the retail industry severely. In addition, Hong Kong’s vaccination rate is not high, the epidemic is intermittent, customs clearance is not due, shops are frozen in the market, and shop owners are begging for customers. Some people go shopping. Recently, a shop on Russell Street in Causeway Bay was rented out at ultra-low prices and short-term leases. The transaction rent was only one-tenth of the peak period, 100,000 yuan per month. Shop B, G/F, No. 60, Russell Street, owned by "The King of Minibuses" Ma Yamu, has been leased to a mobile phone accessory shop for a short period of about 100,000 yuan per month from April this year. The lease term is three months. Ma Yamu's eldest son, Ma Qiaosheng, said that first, let short-term tenants fill up the jishop, hoping that "there is no difficulty in seeing the street." Hong Kong Wen Wei Po reporter Li Zitian

Ma Yamu's eldest son, Ma Qiaosheng, said that it will take time for the core area to recover. He hopes that "there is no difficulty in seeing the streets, and there are fewer niche shops, so the short-term rent is filled up first." He also said that the tenancy requirements are also handled flexibly. Long-term leases can be reduced to one year at the minimum, which is different from the usual two to three-year leases. The rent can also be flattered until the tenants "get food first." ", adjust later. Ma Qiaosheng believes that as more people are willing to be vaccinated, retail market conditions have also begun to improve. He noticed that retailers are becoming more active, and future rent trends will depend on when the government clears customs.

Rents dropped by more than 90% from watch shops

Looking through the information, Ma Yamu bought the aforementioned Russell Street shop for 108 million yuan as early as 2005. The shop was rented by Prince Jewelry and Watches, which sells high-end luxury goods, for about 450,000 yuan a month in 2008. The rent has been rising since then, reaching its peak in 2013. During the period, the watch shop was renewed for about 1.2 million yuan a month, with a rent of 1,091 yuan per square foot. If the current short-term rent of 100,000 yuan is compared with the peak period long-term lease rent, the rent has plummeted by more than 90% or 1.1 million yuan.

After the outbreak of the new crown pneumonia virus, customs clearance restrictions have been implemented all over the world. In addition, the government relied solely on direct cash funding but lacked follow-up strategies. Many retail and catering industries have to "hang salt water" to survive. The Census and Statistics Department announced earlier this month that the value of total retail sales in March was provisionally estimated at 27.6 billion yuan. Although retail sales in March recorded a significant year-on-year increase, it was mainly due to the very low base of comparison last year. In the first quarter, the retail sales volume increased by 7.2% year-on-year, but it was still 32.5% lower than the first quarter sales volume of 2019. ThisReflecting that the retail market is still some distance from the normal level.

Due to the lack of tourists coming to Hong Kong and the public's unwillingness to spend more, the business of famous shops is almost zero, and they have moved out of Russell Street, which is dominated by high-end consumption. The Asia-Pacific "Main Street" report published by DTZ DTZ has shown that the rent of Russell Street in Causeway Bay has fallen. 43%, the largest decline, the monthly rent fell below 1,000 yuan to only 963 yuan; the rent of shops in Tsim Sha Tsui was 1,045 yuan per square foot, down 35% year-on-year, jumping from second to first place, so Canton Road in Tsim Sha Tsui replaced Causeway Bay It has become the most expensive retail location in the Asia-Pacific region, and it is the first time that Causeway Bay has lost its place as the most expensive retail location in the Asia-Pacific region since record statistics in 2015.

The performance of shops in Minsheng districts was much better than that in tourist areas, and shop rents rose against the trend. Huang Yongshan, the sales director of the Central Plains (industrial and commercial store) section, said that the area of Shop A4 on the ground floor of Nos. 55-71 Chun Yeung Street, North Point. Shop A4 has an area of about 540 square feet and is sub-leased to 3 tenants. There are fruit shop tenants. Part of the floor of the shop is rented for about 47,000 yuan per month, and the lease term is two years. Huang continued that the tenants of the property are also the fruit shop, with a monthly lease of about 40,000 yuan. After the auspicious move out in mid-April, new tenants moved in immediately, and the rent increased by about 17.5%.