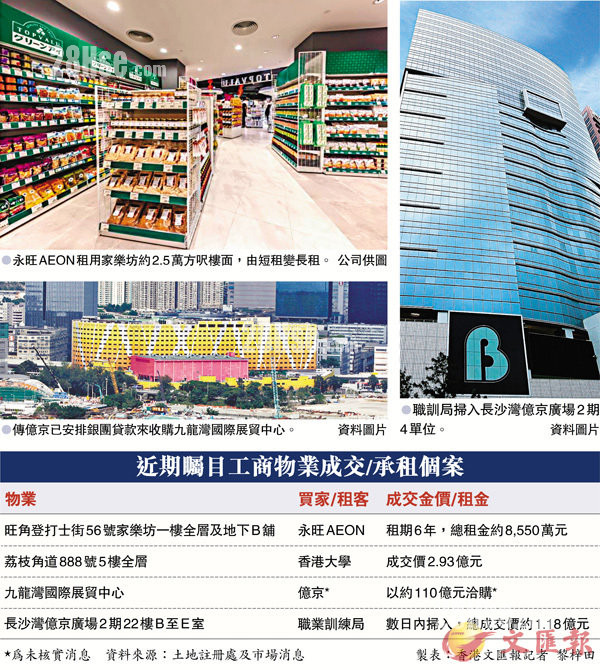 With the easing of the new crown pneumonia epidemic in Hong Kong, the retail market is looking forward to returning to the right track. Coupled with the recent high market expectation of the sale of more than 15% of the Causeway Bay commercial land, the industrial and commercial property market has begun to recover, and many large-scale transactions have emerged. Aeon AEON, a Japanese-owned department store company, announced that it will rent the entire first floor and shop B on the ground floor of Carre House, 56 Dundas Street, Mong Kok, with a total basic rent of approximately 85.5 million yuan. Growing tenants. In addition, the University of Hong Kong also spent about 293 million yuan to purchase the entire 5th floor of No. 888 Lai Chi Kok Road. As for the rumor, Yijing Development also intends to negotiate the purchase of the Kowloon Bay International Exhibition and Trade Center for 11 billion yuan, which may become the largest commercial property transaction this year. Hong Kong Wen Wei Po reporter Li Zitian

Aeon AEON announced that it signed a lease agreement as the lessee yesterday to lease the entire first floor and shop B on the ground floor of Carre House, 56 Dundas Street, Mong Kok, Kowloon, for the operation of the third "AEON STYLE" in Hong Kong, with a lease term of 6 year. It is reported that the property covers an area of about 25,000 square feet, and the total basic rent is about 85.5 million yuan. That is, the monthly lease is about 1.187 million yuan, and the converted square foot lease is about 47.5 yuan. This amount does not include the turnover rent and does not include government rates, management fees, Air-conditioning fee, other expenses and expenses.

At the beginning of this year, Aeon had short-term lease of the above-mentioned properties in the form of Pop-up Store, and spanned the Lunar New Year to the end of February. The venue has changed from selling clothing to selling Japanese food, toys, etc., which looks like a bargain shop. As for the basement part, according to reports from the market earlier that Hang Lung subdivided and leased it, it intends to lease 80 yuan per square foot. This time, AEON signed a six-year lease, reflecting the large retailer’s shift from short-term lease to long-term lease.

In addition, the University of Hong Kong once again bought large-scale commercial buildings. According to the Land Registry, the entire floor of the fifth floor of No. 888 Lai Chi Kok Road, a commercial building owned by New World, was sold for about 293 million yuan, and the registered buyer was the University of Hong Kong. There are 19 units on this floor with an area ranging from 503 to 2,613 square feet. The whole floor has a total area of 24,044 square feet, and the average price is about 12,197 yuan per square foot. According to data, the University of Hong Kong has purchased a number of properties in recent years, including two purchases of Henderson's Xiyingpan Hanlinfeng Mall in 2018 and 2020, involving a total investment of about 960 million yuan, which will be used as a specialist training clinic for the School of Dentistry.

A consortium intends to spend huge sums of money to swallow large commercial properties. Earlier, it was reported in the market that Hopewell Industries was selling the Kowloon Bay International Exhibition and Trade Center in a dark market, with an estimated market value of more than 15 billion yuan. According to market news, Yijing Development, which owns many commercial building projects in East Kowloon, is interested in negotiating purchases, with a negotiated purchase price of about 11 billion yuan. A Yijing spokesperson stated that he did not respond to the above news. According to a source, Nine Exhibitions had been low-key sales two years ago. It is reported that Yijing is interested in this and has conducted research. Now the transaction is a matter of course. Billion Capital recently acquired the property and is arranging a syndicated loan, And consists of 3 banks.

According to the data, the site area of the Kowloon Bay International Exhibition and Trade Center is about 239,800 square feet, and the building is 14 stories high (another 4 floors of basement). The total floor area is about 1.775 million square feet, including conferences, exhibitions, restaurants, office buildings, Commercial and parking lot use. It is reported that the current plot ratio of Nine Exhibitions has not yet been exhausted, and it can be developed at a maximum of 12 times. The total buildable floor area reaches 2,877,600 square feet (including no less than 121,500 square feet for exhibition and trade-related purposes), which is more than the current plot ratio. 1.1026 million square feet, or 62.1%, is eligible for reconstruction. However, other restrictions such as building additional floors or involving changes in land use must be paid for.

In fact, since the government abolished the double stamp duty on non-residential properties on November 26 last year, the industrial and commercial property market has immediately attracted many investors into the market. At that time, it was mainly small transactions, and there has been a lack of large-scale cases. With the control of the epidemic and the expansion of the scope of vaccination, retailers, universities and even developers are now entering the market or renting large amounts to cast confidence in the market. In addition, the "Causeway Bay landlord" Hysan Development has previously offered high market prices. 15% of the bidding for the Caroline Hill Road site is enough to prove that the commercial and commercial market has bottomed out.