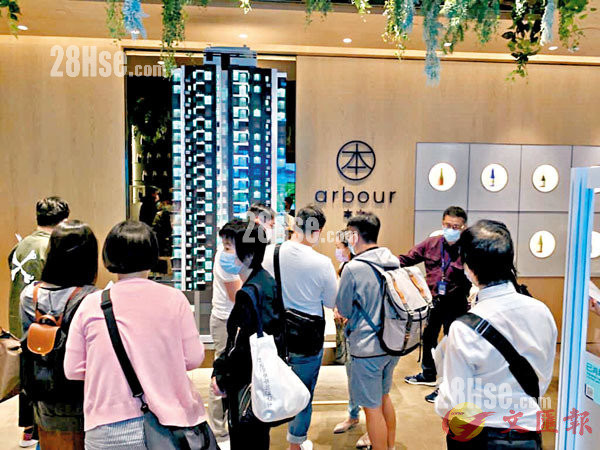 Hong Kong Wen Wei Po (Reporter Yan Lunle) The fourth wave of the epidemic is fierce, but developers are still actively pushing real estate. In the past Saturday and Sunday, there were many new properties on sale. Among them, Minmetals Land's Yau Tong Azure East Coast was newly launched on Saturday. SHKP also relaunched the Nanchang Station on the same day to build Cullinan III, involving 78 units and focusing on 4 bedrooms over 1,000 square feet. Large unit. Among them, Azure East Coast alone had 256 transactions, accounting for 76% of the total transaction volume on Saturdays and Sundays, and 52 units were also sold on the West Side III. The two properties pushed up the transaction volume on Saturday and Monday to about 338 units.

The Yautang Azure East Bank, a subsidiary of China Minmetals Land, was put on sale on Saturday after the project received more than 4,900 votes. The project started selling 279 units in the first round a few days ago, and another unit was sold through bidding. In the end, 256 units (including one of the bidding units) were sold in a single day, accounting for 92% of the available for sale. The amount of arbitrage was calculated at discounted prices. 2.2 billion yuan.

The SHKP Cullinan III also relaunched the Nanchang Station on Saturday, involving 78 units. In the end, about 52 units were sold, accounting for 64% of the saleable units. Together with sporadic transactions, the first-hand transaction volume on Saturday was as high as 324 units. However, the new real estate market lost focus on Sunday and the market returned to calm. Only 14 transactions were recorded on Sunday. In two days, there were a total of 338 transactions in the primary market.

As for the Pavilia Village II, the Tai Wai Station superstructure project co-operated by New World and MTR, the transaction was recorded again on Saturday and Sunday, and a group of top-floor one-bedroom units were sold. The unit was Unit F on the 62nd floor of Block 7 (7A) with a saleable area of 345. Square feet with a 203-square-foot rooftop, the transaction price was 10.43 million HKD and the price was 30,232 HKD per square foot, setting a new high for the project. The price per square foot is expected to break the record of a single room in the New Territories.

It is understood that Boao Zhuang II has been sold over the years since the beginning of the month. A total of 1,349 units have been sold, accounting for more than 95% of the total number of units (1,415) in the project, and more than 15.4 billion HKD has been cashed out. There are 38 units remaining for sale in the project, including 16 units open. Type households and 22 one-room households.

Benmu adds 36 units with an average price of RMB 25,727 per square foot

In addition, Henderson Land's new project "Benmu" in Jordan started selling 68 units last Friday, and finally sold nearly 67 units. The developer subsequently added 36 units, with an average price of 25,727 HKD per square foot. As of 6 pm yesterday, the total number of visitors has reached nearly 1,000 over the past Saturday and Sunday. At the same time, Ricacorp Properties stated that it will give home buyers a discount for home buyers. Starting from December 1st, the first 15 new buyers who purchase this wood through the bank will receive a "RIMOWA" worth HK$12,000. The suitcases are worth 180,000 HKD in total.