Epidemic has repeatedly fallen or expanded in property prices 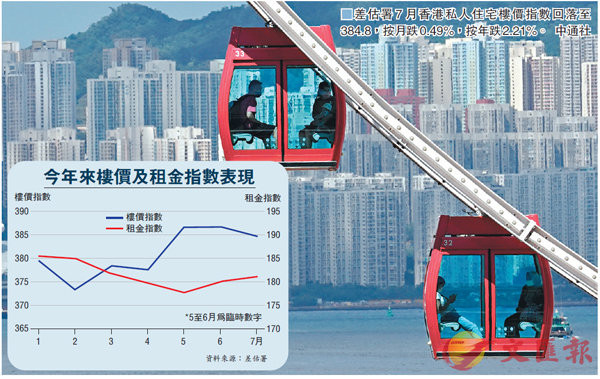 Under the third wave of the new crown pneumonia epidemic, the rebounding property market is back on track. According to the latest data from the Department of Estimates, the price index of private homes rebounded in May and June, and then turned around in July. The latest report was 384.8 points, a month-on-month drop of about 0.49%, and two consecutive months of rising record cable disconnection. According to industry insiders, the July data does not fully reflect the impact of the third wave of the epidemic, and it is expected that the next August property price decline announced will further expand to 1.5%.

According to the Statistics Bureau, the price index of private homes in July was 384.8 points, down 0.49% from 386.7 points in June, and fell again after two consecutive months of rising. In the first seven months of this year, the price index is still 1.48. % Increase, but if compared with the historical high of 396.9 points in May last year, property prices fell by 3.05%.

The biggest drop in fine units

According to Chen Haichao, head of Ricacorp Real Estate Research Department, the July price index mainly reflects the actual market conditions in late June and early July. At that time, the market sentiment was better in late June, but the market conditions were reversed immediately after the outbreak of the third wave in early July. There is a tendency to turn around and fall back. But because the government tightened the two-person gathering at the end of July, 7The monthly price index does not fully reflect the impact of the third wave of the epidemic. This wave of the epidemic also continued into August, so it is expected that the decline in the index in August will expand to 1.5%.

Chen Haichao pointed out that for the rest of this year, property prices are not easy to predict, and will mainly follow the trend of the epidemic. As long as the epidemic does not break out in September and the fourth quarter, property prices will remain relatively stable and positive for the time being, and property prices for the whole year are still expected to record at least. Get an increase of 3% to 5%.

Knight Frank laments the "deformity" of the property market

Knight Frank Executive Director and Head of Valuation and Consulting Department Lin Haowen said that the index fell less than expected in July, mainly due to the better performance of large units, but the data is gradually reflecting the impact of the recent epidemic, especially small and medium-sized residential housing. It is estimated that the property market will adjust Still lasts. He described the current real estate market as "distorted". Residential property prices are still high, but rents have been adjusted downwards due to the economic downturn and high unemployment, while the rents and selling prices of commercial and street shops have continued to fall.

According to the Statistics Department, the latest private residential rent index in July reported 181.1 points, an increase of about 0.6% month-on-month. The index has risen for two consecutive months. In the first seven months of this year, it fell 4.5%. Lin Haowen pointed out that when the epidemic began to ease in May, the purchasing power accumulated before was gradually released. However, in the current economic cold winter, he is worried that this purchasing power will not last until the fourth quarter.

He believes that with the high unemployment rate and underemployment rate, the effectiveness of the government’s "Ensure Employment" program and other relief measures is still unknown, and various factors such as "labor reduction" and "unpaid leave" are estimated to be in the first place. The fourth quarter began to affect the purchasing power of the property market. In addition, the property market is also affected by many factors, such as changes in the local economy, Sino-US relations and so on. Despite this, he believes that the residential property market will not fall sharply, but at the same time it is difficult for a V-shaped or U-shaped rebound. He maintains his forecast of a 5% reduction in Hong Kong residential property prices this year.