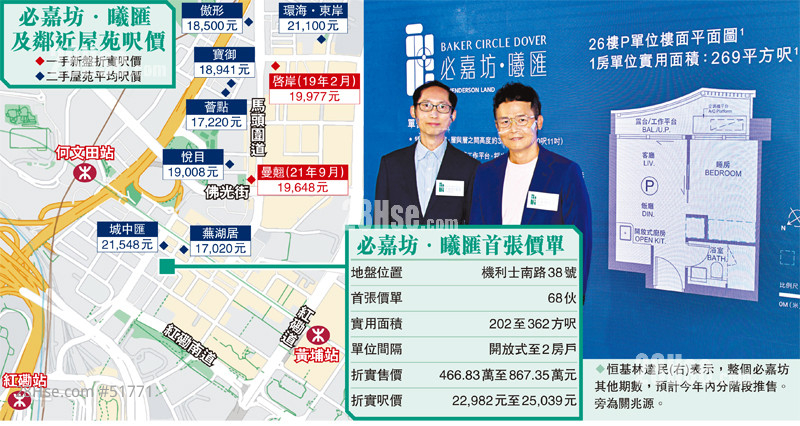 Several new properties have been deployed and put on sale. The large-scale redevelopment project of Henderson Land Hung Hom, Baker Circle Dover, which has been on soft sales for a long time, officially debuted. The apartment has an area of 202 to 362 square feet, and the average price per square foot is $23,888, and the 202-square-foot open-plan unit is sold at a discount of $4.6683 million. The developer described the first price list as "post-epidemic price", which has been discounted. Tickets will be collected today and show units will be opened for sale as soon as next week.

All units are less than 10 million

Lin Damin, general manager of Henderson Property Agency Sales (1) Department, described the price offered this time as a "post-epidemic price", referring to a certain discount due to the epidemic. It was also revealed that the company estimated that the average square foot price of the project could reach $28,000, while the average square foot price of the first price list was $23,888 , which means that the discount has exceeded 10%. And all the units are less than $10 million. Benefiting from the "Carrie Lam plan", you can get a car with a mortgage of up to 90% through mortgage insurance, which is expected to attract young passengers.

Lin Damin also said that the project will start to collect tickets today, and it will go on sale next week at the earliest. As for the other phases of Bijiafang, it is expected to be put on sale in stages within this year.

There are also many new properties in the vicinity of Bijiafang Xihui that have been launched in recent months. Among them, Country Garden Kowloon City Longbi launched the first batch of 50 units in May. The 213-square-foot open-plan unit was discounted to $4.998 million. The average price per square foot of the whole batch was $24,520. However, in the first round of sales last month, 70 units were sold in a single day. Only 12 units were sold. In contrast, the price per square foot of Bijiafang Xihui this time is about 2.6% lower than that of Longbee. As for Ma Tau Wai Dao Man Kiu, which was co-located in Hung Hom by Gui Hong Group in September last year, the average discounted price of the first batch of 50 units was only HK$19,648.

Provide no more than 90% mortgage

According to the price list, this time the developer offers three payment methods: 100-day payment, 200-day payment and construction period payment. Each method is divided into two types, one of which is a traditional payment method and the other is a preferential mortgage plan. After the buyer provides documents to prove the repayment ability, the "special bank" can provide an instant mortgage; and the seller arranges a financial company to provide a second mortgage.The second mortgage is up to 40%, and the total of the first and second mortgages does not exceed 90% of the property price.

It is understood that the second press is P(5%)-2% for the first 36 months, P(5%)-1% for the 37th to 60th months, and P(5%)+1% thereafter. In addition to applying for a second mortgage, the buyer can also apply for a mortgage loan from the financial company arranged by the seller. The loan amount does not exceed 85% of the property price, and the interest rate calculation method is the same as above. On the other hand, the developer opened a standard show unit for handover yesterday, referring to Room P on the 26th floor, with a one-room partition, with an area of 269 sq.

Chen Yongjie, vice chairman of the Asia Pacific region and president of the residential department of Centaline Real Estate, said that the first batch of Bijiafang Xihui has restrained the price. The first price list is mainly for small units. The second-hand price is similar to that of the same project in the same district. It is believed that it can attract passengers to enter the market. 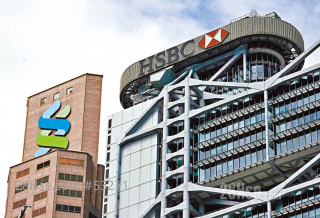 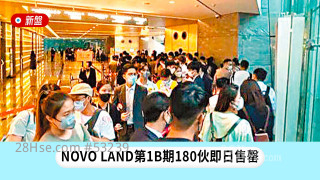